In February released 7AM s/t album is going to be available on Lp on 20th of May. You can preorder it from us or you can wait till May and just order it then. What you can do now is pre-order it at Kapitän Platte, which is our distributor for Germany, but you still have to wait for it till May (Oh, the magic of pre-orders).

We met Pietsch (Kapitän himself) in Bielefeld and he drank enough beers to offer us help with distributing our Lp. He is also the author of  the very flattering text below. Thanx Pietsch and cheers. 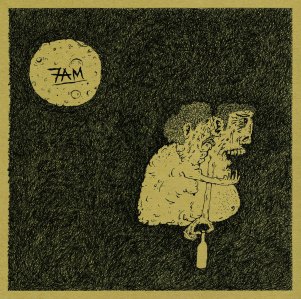 “The sound of 7am is a mix of punk-rock in the vein of Hüsker Dü, grunge à la Nirvana and (of course because of the vocals) rriot-girl punk that reminds of bands like Bikini Kill or Team Dresch.
But the main influence is the college-rock of the late 80ies. If you listen to songs like “Couch” or “Enough is enough” you might think these are lost tracks of Dinosaur Jr’s masterpiece “”You’re living all over me”! Not kidding. Lot’s of guitar distortions, wah-wah feedback and Lou Barlow would be proud of the bass-sound.”

“The record comes in a silk-screen cover printed by the band itself.”